the wizards from aus! 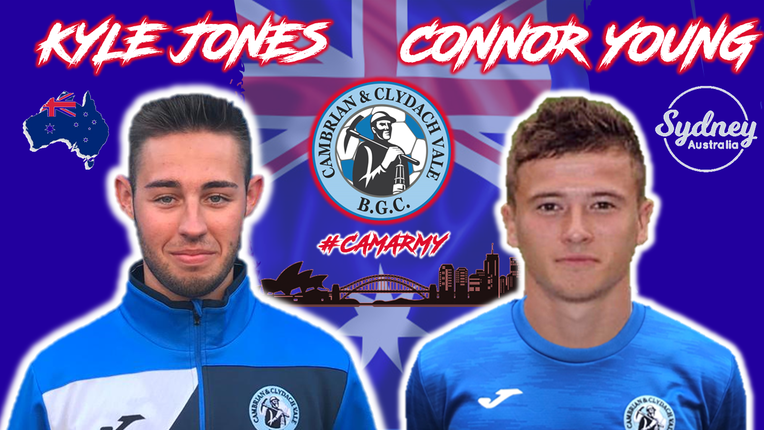 The #CamArmy are delighted to announce 2 new signings for the JD Cymru South campaign for 2019/20 and beyond. Kyle Jones and Connor Young sign from Nepean FC in the State 1 League in Australia. Both are subject to international clearance.

Centre Midfielder Kyle Jones, who left us towards the end of the 18/19 season for a short stay in Sydney, has re signed for the club. Kyle, who can also play in central defence….featured in the famous win vs TNS and also in the Nathaniel MG Cup final. He was a prominent player last season as we ended finishing runners up behind Penybont last time around. The Academy product said “I am delighted to be coming home back to Wales, and back to my 2nd home at Cambrian. I have been at the club since u14, so when i decided to come home there was never any thought about signing for anyone other than Cam. The club, the gaffer and the group of players are special. I have been keeping up to date with the news back home from my mother who has still been helping out at the games.”

Connor signing is a real coup for the club. Connor also left for Australia with Kyle, and prior to leaving was a mainstay in the Merthyr Town team in the English Pyramid. Youngy goes down in folklore at the club, as he was the first ever player from the Academy system to sign professional terms, when he signed for Cardiff City FC. The towering centre back gave us his views…..

“I cant wait to get home and get going again. I am really looking forward to going back to the #CamArmy and hopefully help push the team forward. I really enjoyed my short loan spell at the club, The Academy gave me the opportunity to progress and develop as a 13/14 year old….and I can’t wait to give something back to what is a truly unique set up.”

Manager Dane Williams “We are delighted to have Kyle back. He is a Cam player through and through and was a massive player for us last season. We are looking forward to having him back in the group with all his mates. I am over the moon to get Connor in with us. He is the perfect player we are looking for, he is a local boy with bags of quality and a real hunger to improve and progress. We are excited to have him back with us and no doubt he will settle in straight away as he knows the club inside out from his time at the Academy and his loan spell here previously.”

Director of Football Mark Morgans added “Dane has completed some wonderful work here and credit to him. After the departure of Joe Evans and David Thomas, he highlighted these 2 players as the primary targets he wanted to replace them. Kyle and Connor are positionally like for like compared to Joe and David. The pleasing thing for me again though is the buy in from players who have been here before, left for legitimate reasons, but because of their affinity to the club, it’s the first place they look at to come back and play football.”

“Dane has put together a superb looking squad. We don’t expect to see any more faces come in before the domestic window closes but if Dane highlights a player of significant quality who becomes available and the gaffer wants him, we will do all we can to make it happen and give him the support to propel this club forward.”

There is 1 more signing at the club, with experienced ‘keeper Neil Collins signing on the dotted line, and he is eligible for the trip to Goytre United on Friday.

Some outgoings…..Dane & Mark have been working hard with local clubs to get our promising youth players a taste of senior football and aid their development. They will all continue to play for the JD Cymru Premier Development team.

We use cookies to ensure that we give you the best experience on our website. If you continue to use this site we will assume that you are happy with it.Close